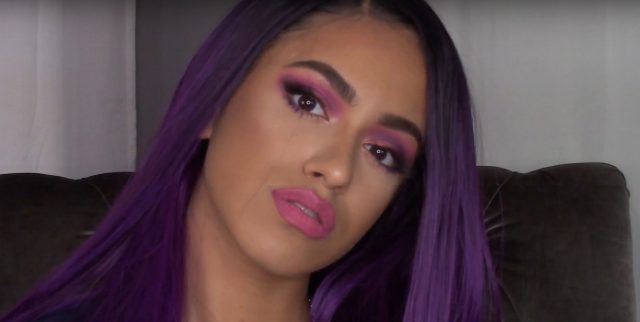 Sasha Banks has a medium bra size. All body measurements are summarized in the table below!

Sasha was born on January 26th, 1992 in Fairfield, California as Mercedes Kaestner-Varnado. Her family moved a lot to accommodate special needs of her disabled brother. Banks’ ancestry is German and African-American. She started early with professional wrestling and studied online in order to save time. Sasha joined WWE in 2012. Her previous nicknames were Miss Mercedes and Mercedes KV. Fun fact: she’s a cousin of Snoop Dogg.

In the following table, you will find all body measurements of Sasha Banks that are known today. Be it the height weight, shoe size, or something else.

I’ve always known that I wanted to be different. I wanted to stand out, so my gear is very elaborate, very blingy, very loud, because I want people to notice me, want to look like me. The Boss necklace, the ring. I want everything big.

My mom was like, ‘What did I do as a mom for you to want to become a wrestler?’ They just didn’t understand, and it’s really hard to explain what made me love wrestling so much. There’s something about it that made me fall in love, and ever since I laid my eyes on it, I knew I wanted to be a professional wrestler in the WWE.

We are at a point now where people respect us and respect our work – the guys want to sit down and watch women’s matches.