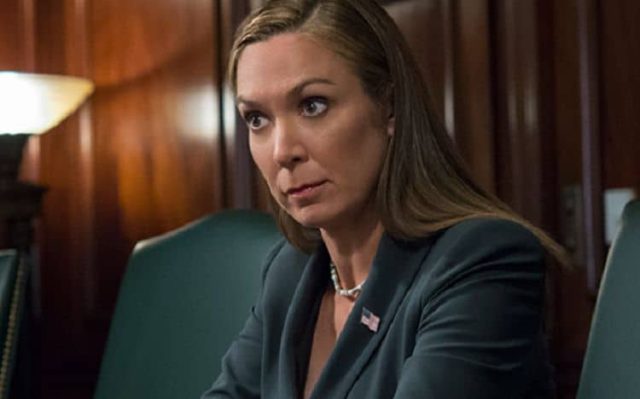 Elizabeth Marvel bra size and other body measurements are summarized in the table below!

Initially famous for her portrayal of Detective Nancy Parras on the CBS drama The District, she later took on the role of Heather Dunbar on the Netflix series House of Cards. Her other television credits include recurring roles on Law & Order: Special Victims Unit and Nurse Jackie.

After training at the Juilliard School in New York City, she appeared in several off-Broadway productions and served as an understudy in the Broadway revivals of The Seagull and Saint Joan. Later in her theatrical career, she performed in Broadway productions of Top Girls and Other Desert Cities.

Her cinematic credits include roles in True Grit, A Most Violent Year, Lincoln, and The Bourne Legacy.

She spent her earliest days in Southern California and the bulk of her childhood in Mohnton, Pennsylvania. Following their 2004 wedding, she and her husband, stage actor Bill Camp, welcomed a son named Silas.

She and Frances McDormand are both known for their work in the 2008 Coen brothers film Burn After Reading.

Tim Burton is an artist who has had a huge influence on me. I definitely share his sensibility. It’s a joyful approach to darkness.

I don’t look presidential. I don’t wear, you know, three-piece suits and have my hair perfectly coiffed.

When I finished high school, I didn’t have much direction – I was a Deadhead kid who ended up bumming around London seeing a lot of theater. That’s where I saw the performance that made me want to act: Vanessa Redgrave doing ‘A Touch of the Poet.’

I have to say, it seems to be the older I get, the better the work gets. When has that been true?

I went to an art school in high school and got in a little trouble like you do when you’re a teenager and not being closely supervised. I did. I followed the Dead around, and it was fun. It was great. It was kind and sweet and lovely.