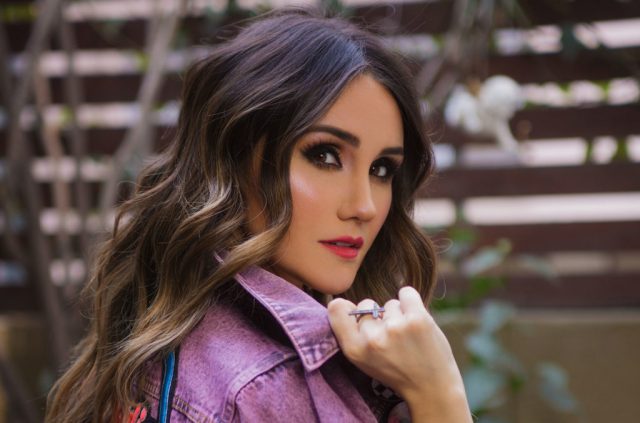 Dulce María has a medium bra size. All body measurements are summarized in the table below!

Dulce María is a Mexican singer, songwriter, actress and author. She is best known for starring in such telenovelas as El vuelo del águila, Verano de amor, Nunca te olvidaré, Clase 406, Rebelde, RBD: La familia, Corazón que miente and Muy padres. She gained international fame as a member of the Latin Grammy nominated Latin pop group RBD. In June 2011, María released her debut studio album Extranjera in association with Universal Music Latino. She released her debut solo single on May 17, 2010, titled Inevitable. Throughout her career, María has won won several international awards as MTV Europe Music Award, Premios TVyNovelas, People en Español Award, Premios Juventud and in the American, Mexican and Brazilian editions of the Nickelodeon Kids’ Choice Awards. She was named as one of the most beautiful by magazines as People en Español and Quien and is one of the most influential Mexican on Twitter. Born Dulce María Espinosa Saviñón on December 6, 1985 in Mexico City, Mexico, to parents Blanca Saviñón and Fernando Espinoza, she is the great-niece of famed Mexican painter Frida Kahlo. She started her career when she was only five years old in TV commercials. At 11 María was part of her first musical group, KIDS. At age 15 she joined the group, Jeans. In November 2019, she married Mexican producer, Paco Álvarez.

In the following table, you will find all body measurements of Dulce María that are known today. Be it the height weight, shoe size, or something else.