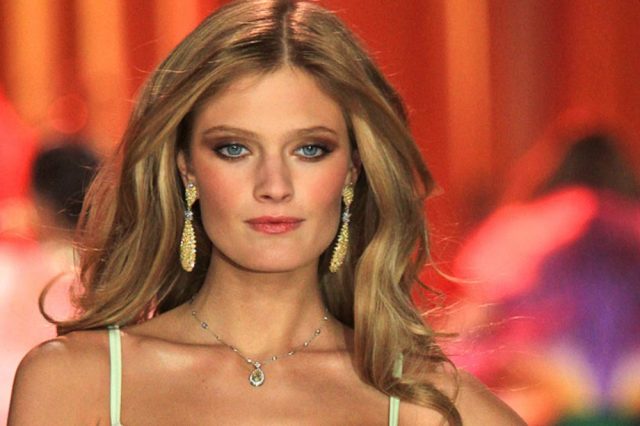 Constance Jablonski has an average sized bra size. All body measurements are summarized in the table below!

Constance Jablonski is a French fashion model who entered the French Elite Model Look Contest in 2006. In 2010, Jablonski became one of the newer faces of Estée Lauder alongside Liu Wen and Joan Smalls. She has appeared in six Victoria’s Secret Fashion shows from 2010 through 2015. She has appeared in campaigns for many important fashion houses such as Alberta Ferretti, Cesare Paciotti, D&G, Donna Karan, Calvin Klein, Topshop, Tse, H&M, Bally, GAP, Moschino, Hermes, Nine West, Majestic Filatures, Max Mara, Barneys, United Colors of Benetton, Estee Lauder, and Y-3. Jablonski has also appeared on the cover of fashion magazines such as Vogue, Harper’s Bazaar, Russh, Marie Claire, Allure, and Vanity Fair. She is represented by the agencies DNA Model Management (New York), VIVA Model Management (Paris, London, Barcelona), and IBTM (Amsterdam). Born Constance Marie Jeanine Jablonski on April 17, 1991 in Lille, France, she is of Polish descent on her father’s side, and of French descent on her mother’s side. She has an older brother named François. Jablonski was discovered in 2006 when she entered the French Elite Model Look Contest and got her first chance to do a catwalk in September 2008 in New York, Paris and Milan fashion weeks. In 2016, Jablonski began dating photographer Vicen Akina. She was previously in a relationship with Imad Izemrane (2011).

I actually wanted to be a tennis player.

I eat healthy, and I eat a lot.

Many models do yoga, but I find it boring. I’d rather be outdoors having fun.

The life of a model isn’t easy. But I try to keep a good head on my shoulders by staying close to my family and old friends. They’re my support system.

I was crazy about Elle Macpherson. She modeled, acted and did everything. She was a huge example for me.